What are the Latest Technologies for a Smart Bathroom

On a recent trip to Japan, I realized how technologically conservative the rest of the world is. Most of Asia has embraced the onset of smart technology and they are integrating it into their lives through smart homes.

Don’t worry the robots haven’t taken over just yet, but there is technology you should add to your home, specifically your bathroom, to save energy, money, and water.

The Latest Technologies for a Smart Bathroom

Some of these additions to the bathroom are costly while others are simple and affordable.

Go through the list to see which smart technology your bathroom needs. I’ve also added a bonus piece of tech at the end for your enjoyment.

Among the list of technologies that make up a smart bathroom, a digital shower is probably my favorite piece of tech.

I feel like a nuclear researcher every time I try getting my shower to the right temperature. A tenth of an inch to the right, a smudge to the left, and hmmm, well, cold for a bit then boiling hot – we’ve all been there right?

Despite all my efforts, the temperature is almost never perfect. It’s either scolding hot or oddly cold.

I even tried setting up my alarm 20 minutes earlier than all my families members just so they don’t flush the toilet or use the faucets, thereby sending a wave of cold water my way.

With digital showers all these inefficiencies become obsolete.

Digital showers are highly responsive and allow you to configure and pre-program the precise temperature at which you wish to shower.

These are perfect additions to the smart home and bathroom because they save energy and money as the risk of overheating is averted and hot water isn’t wasted.

They are also perfect for children and newborns.

No more temperature shifts and no more quantum physics to try and figure out the best angle for the shower handle.

I don’t know about you but I’m a professional singer… well at least in the shower where no one can hear me screech like a crow.

Everyone loves listening to music while taking a shower. There is just something about the private area and the relaxing water that makes you want to jam out to your favorite tunes.

The smart thing to do is get a Bluetooth shower head. This smart technology is wireless and therefore completely safe to use. The speaker system comes built into the shower head and allows you to connect to any device using Bluetooth technology.

The smart tech is designed so that the flowing stare will not disrupt the sound of the music so you can enjoy your favorite music, a weekly podcast, or an audiobook while you refresh.

If you really want to kick it up a notch, you can get a waterproof touchscreen installed in the shower and connect it to your Bluetooth shower head, so you can change music in real-time.

Some smart screens allow you to watch TV, listen to the radio, and read.

To really go for the gusto and up your water saving efforts, you could also integrate an aerated shower head to save money by foaming up the exerted water and dispensing less. The pressure and feel would remain the same but the amount of water you could save in the long term is astronomical. 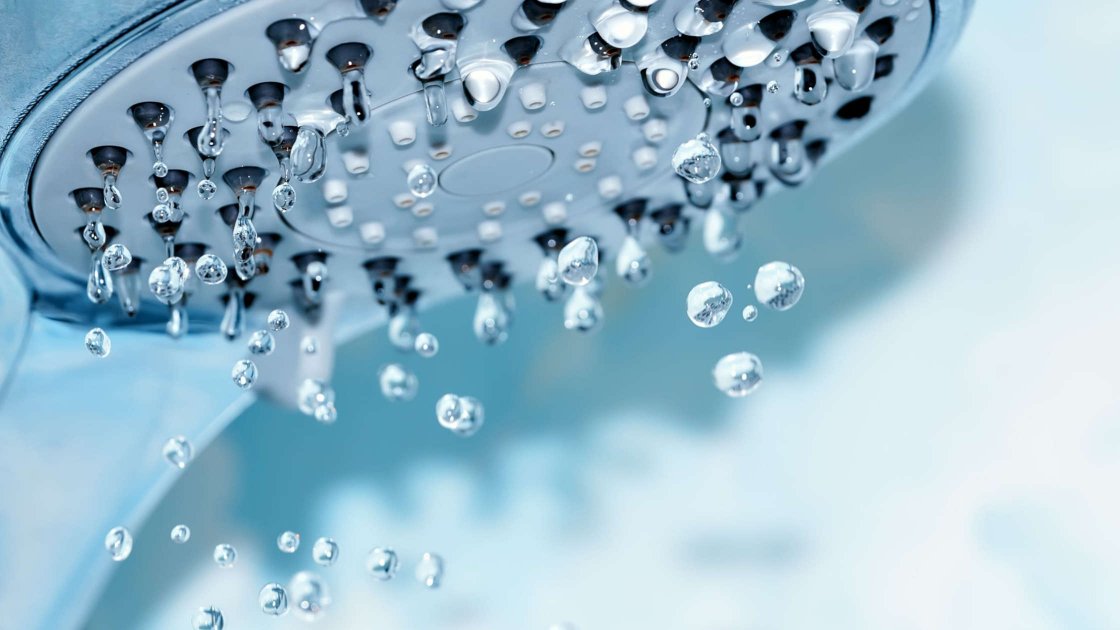 Want to talk about some real groundbreaking technology? Well, you will have to wait because right now we’re talking about steam free mirrors.

Since the water vapor exerted by your shower is extremely hot and the surface of the mirror cold, a thin layer of what is actually tiny drops of water, forms against the entire mirror.

While it can be fun to draw faces and mustaches with your finger, unfortunately, the mist doesn’t just wipe away as it continuously forms.

It’s like an annoying cat that doesn’t grasp the concept of personal space and the smudges never come off when you try to see yourself again.

I’m not even going to pretend to understand the technology behind these surfactant and hydrophilic mirrors but I can tell you this, they work and they are worth it!

To kick it up a notch, some super high tech mirrors come with built-in AI technology that gives personalized feedback on your look and sense of style for the day as well as news and weather updates.

Creepy right? Don’t be so quick to judge, the next item on the list is a bit of a shocker.

Remember the groundbreaking technology I was talking about a moment ago? Trust me you don’t know the half of it.

When I first stumbled upon a Japanese washing toilet, I thought the name indicated an efficient toilet that self-washes. Oh, you poor sweet thing.

Turns out that these smart toilets are in fact very popular in some parts of Asia and come with built-in nozzles and pressurized water streams that clean your backside after every use.

You can even find these in some mall toilets – I’ve seen them in Pattaya. Seriously.

The idea is that you are saving toilet paper and it is hygienic because you are completely cleaned. I must admit, this smart technology is a bit odd, but it totally makes sense.

The toilets have LED lighting in case it’s too dark at night, the cover has a motion sensor to open and close automatically, and the seat is temperature controlled so you don’t have to freeze your backside every morning. They are completely safe to use and have a longer life-time than most toilets.

Some advanced models also have self-cleaning functions so you won’t ever have to clean the toilet yourself.

Simply sit on the toilet, do as nature intended, flush, then using the adjustable speed and pressure buttons, activate the water.

You can also change the settings to make the nozzle spin or move in a certain location.

At the end of your musing, a gentle wind dries you off and you feel like a baby again.

If Japanese toilets are a bit too extreme for your taste, consider a waterless urinal

Urinals are commonly found in public restrooms, restaurants, and gas stations because they are easy and fast to use and most guys prefer them over traditional toilets anyway.

Getting one for your home isn’t a bad idea. In fact getting a waterless urinal is an even better idea.

Waterless urinals come with a built-in under a layer of oil that traps the urine and smell under it, which is why the smart tech requires no water whatsoever. These models are relatively affordable, around $200, and based on the water savings you could have your money back within two years.

Fellas if you need to convince your wife to let you get one of these, tell her that if you do buy an easy to install waterless urinal unit, then she’ll never have to put the toilet seat down again…

I bet she pays for shipping.

No, it’s not some hip-hop album cover, low flow toilets are a great addition to your smart home, in fact, you probably use one every day.

Most modern homes already have low flow toilets but if you don’t have one yet then consider getting one. These toilets come with dual flush options and overall use less water on every flush.

In fact, older toilet models or so inefficient that by switching to low flow toilets, you would save two to three times on the water you spend per flush!

Among the small and mostly inexpensive changes, you can make is the addition of smart motion activated lights, fans, and faucets.

Kids brush their teeth like there’s in no tomorrow and adults are no different when it comes to shaving. We leave the water or even when it’s not being used and sometimes we forget to turn off the bathroom lights.

Adding some motion sensors will dramatically increase how much energy you save. The technology activates when someone is in the bathroom, using the faucet, and when the fans need to be switched on.

You can still manually turn everything on and off, it’s just a second measure in case you forget to do some of the actions.

The very high-end models that come with built-in programming allowing you to set up specific schedules can be pricey, but most motion sensors for lights are relatively cheap and easy to install.

This is the cheapest option apart from aerated faucets and shower heads to elevate your smart home technology.

Smart soap dispensers are a great addition to your smart bathroom and had a level of modernity and functionality to your interior design.

Water Pebble is one of those necessary purchases but if you’re going to go down the road of total smart technology then it is something to consider.

These tiny little pods sit at the bottom of your shower or tub and using LED lights let you know how long you have been showering and when it’s time to get out.

Whether you use a regular timer or a water pebble, cutting your shower time is a great water saver and will save you a lot of money over time.

The path towards a smart bathroom is not one often taken by home designers but the benefits, efficiencies, and comforts, as well as aesthetics, are well worth the extra effort. Start small and work your way up to a completely functional energy-saving smart home.

Ian is the Editor for Weird By Design. An avid consumer of nice stuff, writer, blogger & computer power user.
Interested in Design, Trading Markets & the finer things in life.

We use cookies to ensure that we give you the best experience on our website. If you continue to use this site we will assume that you are happy with it. To learn more about the cookies we use, check out our Cookie PolicyAcceptNopeCookie Policy