Is a Waterless Urinal at Home a Good Idea?

I recently wanted to install a waterless urinal at my house but was unsure if it was a good idea what the benefits were or if there was a downside. So I did a little research bought my own urinal and was actually surprised at some of the results.

So is a waterless urinal at home a good idea? Well I think it is a good idea, especially in households with several males, because the water savings are substantial over using a regular toilet. That means saving money on your water bill. The initial cost is quite high if remodelling but savings will recoup that quickly. Zero flush urinals are also easier to clean and not at all smelly.[ez-toc]
After some considerable time digging through sources, talking to friends, and using my own waterless urinal for a few weeks, I can honestly say that installing one at home is a great idea.

I would recommend you seriously look into getting one for your home! Especially if there are many males in your family!

My first encounter with a waterless urinal was about a year ago at a friends house during a dinner party. This was the first time I had seen a waterless urinal installed at a house. A using it, I have to admit I wanted one for myself.

I did a quick search online, found out how they work, how much they cost, what the benefits were, and I was hooked.

I ordered a great looking one from Amazon (one of the cheaper ones) and this is what I found out after some further research.

How Much Water is Saved with a Waterless Urinal vs Standard Toilet?

So with an average household of, say, four people of which two are male, around 60 gallons of water would be saved. That’s a lot of water. And more people means more water savings. Slightly compensates for the additional food consumption I guess.

How Much Money Will a Water Free Urinal Save Me?

Assuming a household with two males, with older style toilets, a zero flush urinal would save about 60 gallons per day or 21,000 gallons over a year costing about $40. With four males that would rise to $80. You also have to price in the cost of cleaning, less leakage & maintenance and so on. So depending on male occupation you should recover the cost of the urinal in 2-3 years.

I was hesitant to buy a waterless urinal at first because the average price for one was between $200 and $400 on Amazon. I asked myself why would I need a second “toilet” if I already had one in my house?

This was my first mistake; assuming the two were in any way similar. My research revealed a different story entirely.

Waterless urinals may have a high upfront cost but over time they save a considerable amount of money compared to conventional toilets. One home improvement source cited that on average waterless urinals save $280 annually.

So you could potentially break even in under a year but the reality is more likely to be two to three years, which is still a good return for an ecological waste solution.

These urinals are easy to install and all you have to do is replace the overlying cylinder once every few months (some models don’t even require replacements). Traditional toilets have multiple moving parts that jam-up, rust-prone components, and need constant maintenance. Say goodbye to those pesky plumbing charges and switch to waterless urinals!

Now, you may be thinking that you haven’t had much trouble with your regular toilet so the maintenance costs are minimal. Before jumping to that conclusion though you’ll need to work through the water usage costs as well as buying those little blue tablets to hide the nasty brown stains that are lying just under the water level.

There is also the savings on winterization, reduced septic tank clearout, reduced blockages to drains, no limescale build up to pipes and so on. With increasing water costs and expenses generally, the savings will likely be even better.

Quick Tip: Check to see if there are any rebates to be had in your location as there are incentives in some places which could be the deciding factor in easing the cost.

Who doesn’t love saving money, but when you get to save money and do something good for the environment, now that’s a win-win.

Waterless urinals are environmentally friendly and save tens of thousands of gallons of water every year. This effect is magnified in households with multiple boys. An exponential growth in terms of water saved will be seen every time an additional waterless urinal is added to a large location, household, or business.

Imagine saving water every time your husband, brother, or dad has to go to the bathroom, never mind the saving in floor cleaner and arguments over who is the leaky culprit!

I would say any home is a great place for a waterless urinal especially if it’s a large household with more than one boy. For businesses, the savings are a no-brainer – plus a great advertisement for the forward-thinking mindset of modern technology even in the restrooms.

How do Waterless Urinals Work? 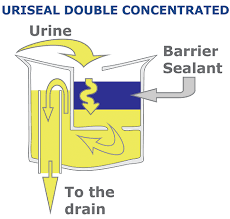 This is the main question I had when I used the waterless urinal installed at my friends home. How does this thing work?

At first, I thought there had to be at least a little water being used or some kind of liquid that helped “flush” down urine after every use. I also thought there was some kind of soap bar or urinal cake placed on the cover because there was no odor of any kind. It’s actually much more creative than that.

The process involves no water at all just like the name suggests and there is no use of harmful chemicals or odour fighting soaps, nor is there any need for constant cleaning and care. The mechanics are simple – basic science we all experimented with as kids.

What happens when you pour water into a cup of oil? Well as we all know oil is hydrophobic, that’s the fear of water, and doesn’t mix with water. Instead, liquid water poured unto oil will sink below the surface creating a clear and distinctive line of separation between the oil and water. That’s exactly how waterless urinals work!

A protective grill allows urine to flow down into a layer of barrier oil. The urine slowly swirls downwards under the oil which traps it. As the urine level increases in the urinal trap, it eventually rises enough to fall into the outlet pipe and away into the regular drainage pipework. This is how waterless urinals work!

So there is no need for gallons of water or flushing. Since urine is trapped under the layer of oil, which in some cases can be simple vegetable oil or a more complicated synthetic based oil formula, any air bubbles escaping from the urine rise to the surface but don’t get through the oil.

No they do not smell if properly maintained. The oil barrier keeps the urinal airtight and fresh and prevents foul gasses exiting through the urinal just as water in a conventional toilet works. So most high-quality waterless urinals are completely odorless!

One other odious thing you should also consider is cleanup. Conventional toilets require constant cleaning up otherwise they become smelly and ideal breeding grounds for harmful bacteria. I don’t know about you but cleaning toilets isn’t fun. Water free urinals, on the other hand, are easy to clean because they are smaller in size and don’t require the consistent sanitation that toilets do.

A simple wipe down (less frequently than toilets) with antibacterial wipes and a little warm water will do the job.

So what about when you miss? Ok… I know it’s on your mind, so I’ll just go ahead and answer… Yes, it’s difficult to aim and sometimes accidents happen. Every guy out there knows this! But it is so much easier to use urinals than toilets because there is no chance of missing, the urinal wall catches everything and largely prevents splashing.

And you avoid urine dripping down the outside of the toilet and onto the floor, getting trapped in the floor surface which causes the smell. And no leaks around the difficult to maintain a seal between the large diameter toilet exit and pipe.

Avoid messes and spills around toilets by getting yourself a waterless urinal.

Could You Put the Toilet Seat Back Down? The Old “Seat War”

Trust me buying an easy to install waterless urinal is much more convenient for both men and women. Most men don’t sit down when they urinate so putting the seat back down isn’t instinctual or natural. It’s like an extra annoying step we never think to take and it almost always leads to a fight between couples and partners. An easy way to avoid those annoying fights with your spouse is to simply invest in this modern urinal technology.

Doing so will essentially make the urinal a “guy only zone” and reserve the toilet mostly for the lady of the house.

The seat will never go back up and the horrible “seat wars” will finally be over!

A Great Conversation Piece and Perfect for Guests

When I finished using the waterless urinal at my friend’s house I almost ran out of the bathroom because I was so excited to tell everyone about what I just discovered! I had never thought of installing a urinal in a house. For the rest of the evening, everyone was talking about how interesting it was to see a urinal in a home and the hosts kept bragging about all the great benefits. Maybe not ideal conversation at the dinner table but …..

Needless to say I was intrigued and wanted to know more. A waterless urinal is just one of those things that you don’t know you need until you have one. The best part is it feels like a luxury or expensive item that says something about the atmosphere and environment of your home. I hesitate to say it but the imagination to install one rubs off on you.

They are fairly affordable and, as mentioned above, cost friendly, in the long run saves more money than regular toilets or urinals.

Not only are waterless urinals cause for endless conversation with friends but they are also perfect for guests to use. More often than not dinner parties can lead to lines forming outside bathroom doors and the next day you’re left with a poorly used, smelly, and dirty toilet.

It’s a painful truth but your guests don’t care about the cleanliness of your house as much as you or your family members do.

Luckily, urinals are quicker to use than most toilets, so guests can have better access to the bathroom area and of course waterless urinals are more sanitary and hygienic. If you entertain guests on a regular basis, getting a waterless urinal is a really great investment, benefitting both your guests and for your own sake.

Is it a Real Estate Goldmine?

No, it’s not going to be the tipping point most likely and your home value is not going to increase overnight once you install a waterless urinal but there are other real estate related benefits to having urinals in your home. According to RE/MAX agent Barbara Kreglow waterless urinals “might sell [homes] faster if a guy is the buyer”.

This makes sense because most guys prefer urinals to toilets and what guy doesn’t want a waterless urinal in his home if he can get one?

So, in the long run, it’s really not a bad idea to install a waterless urinal in your home.

If you liked this article please give us Your Rating here:

Ian is the Editor for Weird By Design. An avid consumer of nice stuff, writer, blogger & computer power user.
Interested in Design, Trading Markets & the finer things in life.